Who is Blaine Fontana? 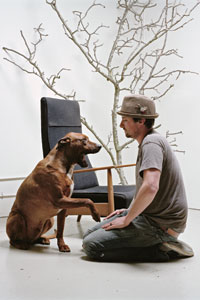 Blaine Fontana currently lives and works in Portland, Oregon. Imbuing his vision with the divine symbolism of religious myths, worldly folklore and current social dynamics, his works contain a kind of shamanic exploration of meaning that recognizes the totemic quality and power of the image. Fontana’s work displays a virtuosic understanding of sign & simulacra and their role within our contemporary visual culture. Straddling the physical and metaphysical, organic and architectural, painterly and graphic sensibilities, Blaine fuses multiple visual strategies to forge an aesthetic language entirely of his own making.

Blaine Fontana received his BFA in Communication Art/Design from Otis College of Art and Design in Los Angeles, CA in 2002. He was awarded “Best in Show” for his senior thesis project and is one of only seven distinguished alumni from 2000-2010. He is regularly involved and donates to non profits, charities and volunteers numerous hours for his community, people in need and making this world a better place than how he found it.

When he is rarely working he is a deeply loving partner, mentor to Louise, doggy playing, adventure glamping sexual, backyard hosting, hot tub championing, big ocean sniffing, river raging, family bonding and nature loving man who has a big thirst of everything and loves nothing more than sharing all his entire being with amazing human beings. He hopes that we all and always “Stay inspired and stay true”.