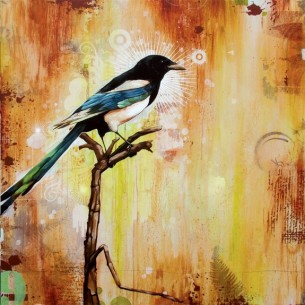 Scribbles Magpie
48 x 80″ acrylic on board and wood sculpture

Long time friends and gallerists, Brian & Robin Christenson from Scribble Theory Gallery, commissioned a piece in 2007, 2 years later it was finally completed. Due to moving 2 times in different states, my schedule became a little overwhelmed.  I’m glad the procrastination was a part of this process though.  My work had drstically evolved over those 2 years and created a piece far better than if I had did it within several months.   Its built on 6 box panels, varying in depth from 6″ down to 1″. The composition of squares is based on the golden rectangle, and the depth becomes smaller as the scale of the squares goes back into space.