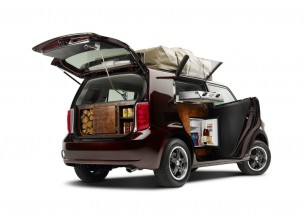 Blaine recently had the privilege to join the small handful of artists who have been commissioned to create a concept car for Scion.  He took a strict design approach, rather than an artistic one to respect and compliment the integrity of the xB.  It was inspired by the countless road trips he does with his wife and 2 dogs from Long Beach, CA to Seattle, WA.  The xB is loaded with devices similar to an RV but in a compact space.  Some of the amenities include a wind turbine generator to charge a peripheral battery for electronic devices at a camp site, pull out sink faucet that becomes a shower when attached to the open tailgate.  Propane gas range, hot and cold water, refrigerator, off road tires with lift, wood rack and the Overcamp Tent system with memory foam that can collapse and set up in only a few minutes.  The cruisers you see were provided by FELT Bicycles, a client of Blaines for years now.