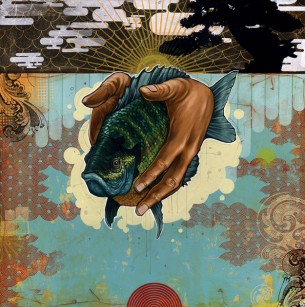 The Process of a Commission

Recently a high school friend contacted me after we hadn’t spoke or seen each other in over 13 years. He and his wife were very interested in a painting for their house. Never having commissioned a painting especially for themselves, I thought it would make an engaging post on this process, and as a reference for others in the future.

Their original interest and inspiration for the considered piece was this small digital piece I did back in 2007 for the “taxonomy animalia” show at the limited addiction gallery(now dave b smith gallery). What followed was a lengthy approval process that required the finish painted to be done in a way I had never painted before. They wanted a 77″ x 33″ painted piece, but done in the style of the digital painting. It was the background graphics and the transparency effect that they really admired. This posed a major technical challenge when it came time to render the bird, which they had expressed to be a phoenix instead. We started with some digital comps and searching for the perfect bird reference.

I would occasionally update them with photos as I went along in the work process. When was I at the point I felt the background was rich and compelling and needed no further work, it was time to start the bird. It was an intimidating moment, because this was a crucial commitment, since the nature of this process allowed no further “back rendering” due to the phoenix transparency effect. Once I began the phoenix there would be no command Z.

I was never thrilled about the original phoenix reference, but I found that Osprey’s were a solid reference that portrayed a bird with a robust presence and anatomy. I ended up sketching out my own version the phoenix from a dynamic eagle image I found. This was the finally approval, and the clients like me, were now very satisfied with the composition/position of the bird.